An investigative performance project about the politics inside the art industry. Conceived in the art residency of the Young Academy of the Akademie der Künste in Berlin in 2020. Read a practical guide “How to Sell Yourself to the West?”. Watch a teaser of the performance (starting 13:00) as a part of the Digital Open Studios of the Akademie der Künste. 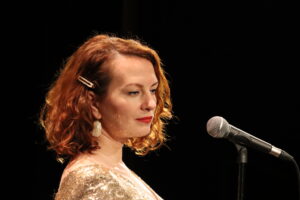 CARIES OF CAPITALISM (co-autor and co-creator)

Nominee for the grand prize of the Sergei Kuryokhin Contemporary Art Award 2020. Long-list of the most notable theatre productions of the season 2019/2020, chosen for the special program “Russian case 2020” of the Golden Mask Russian National Theatre award.

The winner of the Black Box Residency 2018/2019 at the Meyerhold theatre center. Long-list of the most notable theatre productions of the season 2018/2019, chosen for the special programme “Mask Plus” of the Golden Mask Russian National Theatre award.

Male sexist texts performed by female bodies. Based on the verbatim play Locker Room Talk by Gary McNair. Created in collaboration with a choreographer Daria Iuriichuk and a dramaturg Olga Tarakanowa. Premiere – June 4, 2019 at the Meyerhold Theatre Center (Moscow, Russia). WATCH A TEASER

A devised multimedia theatre piece about edgeland of life and death. RCSSD, London, 2018.

An immersive theatre piece about new wave of Russian emigration. Co-created together with a playwright Natasha Borenko. Premiere – ICAF-Festival, Rotterdam, 2017.

Workshops and lectures about forum-theatre in Russia in collaboration with Masha Kolosova and invited artists. St.Petersburg / Moscow / Voronezh, 2016-2017. Watch a workshop trailer or a lecture (rus).

A documentary theatre piece about “we” and “they”. Co-created together with a playwright Natasha Borenko. Laboratory ON.Theatre, St. Petersburg, 2015.

FRIDGE – FOR VANILLA ICE-CREAM! (curator, co-director together with E.Maximova and S.Svistunovich)

A documentary theatre piece with teenagers of different nationalities about xenophobia and tolerance. Scriptwriter – A. Gorbova. Laboratory ON.Theatre, St.Petersburg, 2013. WATCH A TRAILER